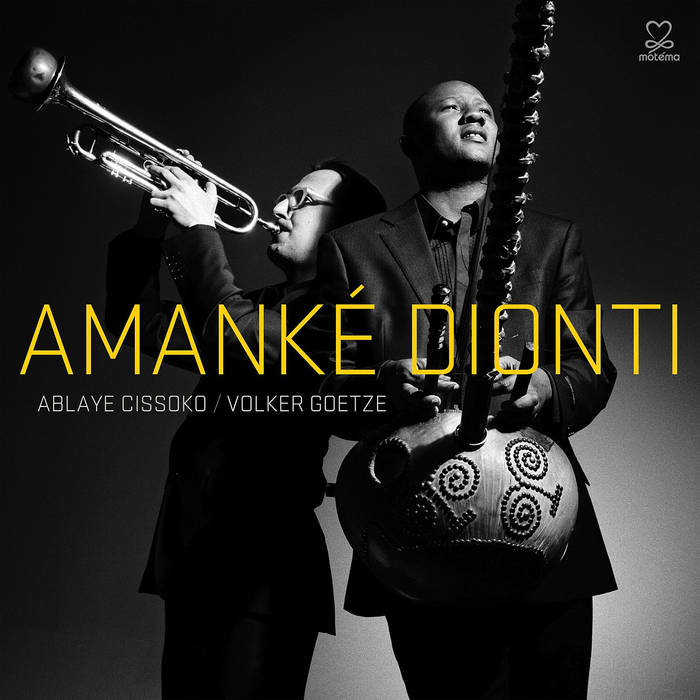 The music that German-born and New York City-based trumpeter Volker Goetze and Senegalese vocalist and kora player Ablaye Cissoko create transcends both geographic and musical boundaries. When the duo first came together for their 2008 debut, Sira, their collaboration resulted in a unique musical synthesis that fused the timeless tradition of the storyteller/griot with a modern perspective. On their Motema Music debut, Amanke Dionti (May 8), Goetze and Cissoko have once again set out on an spiritual sonic journey, one that ranges from the desert and coast of West Africa to the urban landscapes of New York and Paris and which addresses themes of our ancient spiritual roots, and our hurried, dehumanized modern strife. In the tradition of the griot, Cissoko attempts to mend our souls with music, and with Goetze as his partner and champion, he succeeds, as their recordings are truly soul soothing.

Goetze says that the music on Amanke Dionti evolved during the extensive touring schedule he and Cissoko have kept up since the release of Sira. “You can say that Sira came about intuitively, while by the time we recorded Amanke Dionti, we were much more aware of the elements that make our pairing work,” he explained. Performing internationally certainly provided the duo with ample space in which to further define their unique chemistry, whether it was during sound checks, backstage, or performing live. And while the spirit of improvisation is key to the almost meditative essence of their sound, Goetze also emphasizes that Amanke Dionti is equally about focus. “When we play, we are simply playing in a state of mind much like meditating. Any great performer knows how to get into his ‘zone,’ and it amazes me that we can stay in that zone for over an hour every time we perform live. Of course, the energy of the audience helps. But when we are recording, it’s important to spend as much time as necessary in that place as well, not for the sake of perfection, but to allow that same moment of peace to enter. If one meditates, you know that we cannot stay ‘in the moment’ for very long. It’s hard work. The mind wanders. One continually needs to bring it back to the present, to the breath.”
For the making of Amanke Dionti, Goetze and Cissoko opted to skip the sterile environment of the recording studio in favor of recording in the very special environment of Bon Secours, an historic all wooden church in Paris that dates back to the mid-nineteenth century. “Playing acoustic enabled us to interact with a greater dynamic. Rooms with a natural reverb are perfect for the kora, voice and trumpet. An all wooden church provides that perfect environment, while the spiritual, mystical nature of the space itself served the spirit of our music.”

Cissoko, who comes from a long line of griots– West African storytellers and praise singers who are the repositories of the oral tradition of their people, addressing personal and social matters through music – utilizes the platform of his recordings with Goetze to create a new paradigm for his traditional role. The subjects of his compositions are both personal and universal, based on experience and observation. The serenity of the opening track, “Kanan Maloundi,” mirrors the griot’s appeal for society to respect art and its fragility through the lyric, which is in Mandinka. Cissoko’s exquisite vocals, accompanied by the serene interweaving of kora and trumpet, are the hallmark of the sound and style that have earned the duo accolades around the globe.

“Amanke Dionti,” which can be translated to “She is Not Your Slave,” is sure to create controversy in Cissoko’s home country of Senegal, as it tackles one of the least public but still very troubling societal issues facing the Senegalese people. Cissoko’s lyrics exhort respect for the thousands of young women, who are sent by their starving families in the poorest remote areas to serve as maids for more prosperous urban families. These young women hope to work in exchange for food, shelter, education and certainly more money than they ever might have been able to earn had they remained at home, but instead many are exploited and treated as nothing more than slaves. By openly addressing these conditions, Cissoko is violating a taboo in his homeland: While the role of the griot may have been to speak out about those things that ordinary people were not allowed to address, Cissoko takes these issues to an international audience, becoming in essence a “global griot.”

Goetze’s somber trumpet opens the wistful “Togna,” as Cissoko’s lyrics offer a message of tolerance and respect. Goetze interprets: “People who disrespect and harm others because of race or religion, are really just crying out for love. One can only hope that they will learn to love themselves before they disintegrate into violence.” Being true to one’s own heart is at the heart of Amanke Dionti’s up-tempo “Silo,” which Cissoko says translates as “straight path.” With no vocals and only the lively interplay of the two instruments, the song moves forward with a surety that echoes its underlying message. The flowing and sparkling “Flueve” was written in homage to the Senegal River, which finds its end at the Atlantic Ocean in Saint-Louis, Cissoko’s hometown.

The song “Haiti” speaks not only of the natural devastation caused by the 2010 earthquake, which killed over 300,000, injured another 300,00 and left over one million people homeless, but also of the suffering caused by the ensuing political greed and corruption. Cissoko again fulfills an important function of a griot: preserving the oral culture and history of important events in a time when written language was non-existent.

Amanke Dionti closes with “Miliamba,” which is traditional in its origin, relating the story of a virgin sacrifice to the ancient gods. “For me, it represents all those unwilling offerings we experience through injustice and intolerance,” says Goetze in explanation of the duo’s decision to include it on the CD. “It has a healing sadness for me.”

Also included on the CD is an excerpt from Griot, the documentary film by Goetze that stars Cissoko. The film was shot in Senegal, back when the two were working on Sira. Until then, Goetze had not known much about griots, but once his interest had been piqued, he wanted to share what he’d learned with a larger audience. Eventually, he came to collaborate with Academy Award-nominated documentarian Sam Pollard (who has also worked with Spike Lee) on the film, which is currently being readied for submissions to film festivals internationally, and which had its first pre-screening at Womex in 2011. Ablaye Cissoko and Volker Goetze played together for the first time in Senegal with the African-European Jazz Orchestra as the opening act for Youssou N’Dour in 2001. They soon discovered that despite their many cultural differences, their common personal and musical sensibilities resulted in a deep friendship which in turn gave rise to shared artistic and social goals. Cissoko’s interest in jazz and Goetze’s interest in West African music were wonderfully complimentary prerequisites for a fascinating and mysterious dialogue, which Cissoko succinctly captures by saying, "De notre diversité s'élève une force," which translates to, “From our diversity, grows a force.”

German-born and New York City-based Volker Goetze has collaborated with many important artists in both the jazz and world music arenas, including Nana Vasconcelos, Craig Handy, Peter Kowald, Markus Stockhausen and Lenny Picket. Ablaye Cissoko is considered one of the most brilliant proponents of the kora, a 21 string harp-lute, and is equally noted for his emotional, evocative vocals. His incredible talents have led him to work with such acclaimed artists as Motema label-mate Randy Weston, and the respected world music artist Omar Pene.

Their 2008 debut, Sira, met with powerful international acclaim. The Boston Globe lauded the CD as  “a quite gem,” and All About Jazz raved, “A breath of fresh air….Sira provides an oasis of calm in which to pause and rest, to reflect and be moved…” BBC World on 3 extolled the CD as “a wonderful collaboration of culture and languages,” while in France, Jazzman’s 4 Star review stated, “Sira marks a true meeting of the minds…a hymn to simplicity and to the universality of music. Beautiful.”

In keeping with the strong element of social conscience that permeates their lives and work, Cissoko and Goetze realized that their partnership would have even greater cultural significance if their creative alliance could benefit local communities in West Africa. The artists are donating 10 percent of their profits from Sira and Amanké Dionti to Tostan, an organization whose mission is to empower African communities to bring about sustainable development and positive social transformation based on respect for human rights.

The recording was made possible with the generous support of the Foundation BNP Parisbas.

Goetze and Cissoko will support the May 8 release of Amanke Dionti with performances scheduled as widely afield as Oman and Germany. The two will host a screening of the feature documentary, Griot, followed by a discussion and performance, at NYU’s Cantor Film Center.

Bandcamp Daily  your guide to the world of Bandcamp