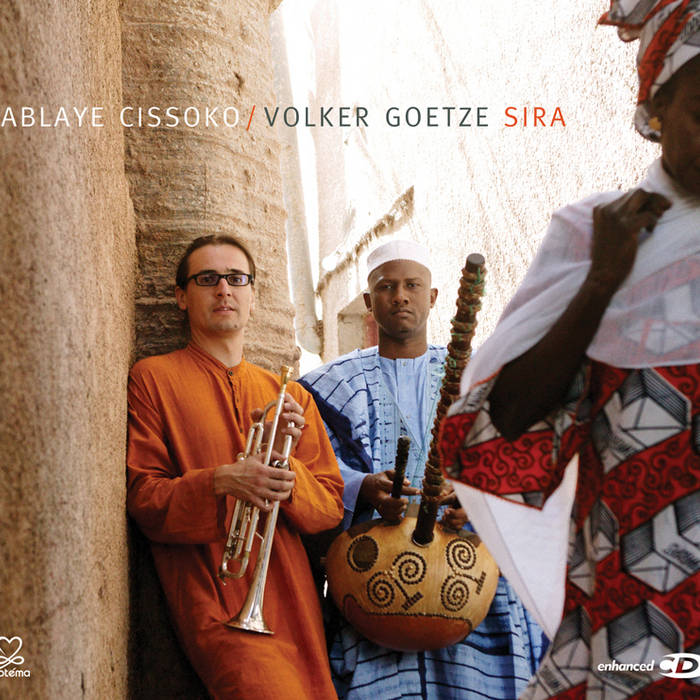 The mutual admiration society that is Volker Goetze and Ablaye Cissoko owes itself to a serendipitous meeting that took place in 2001 at the African-European Jazz Orchestra rehearsals in Saint-Louis, Senegal, where they’d been invited to open for Senegalese legend Youssou N’Dour. Despite any cultural barriers that separated them, the German-born trumpeter and the Senegalese kora player and singer discovered they had much in common, both musically and personally. Their commonalities can be heard on Sira, which is an album that reaffirms the maxim that music is the universal language. The album releases in October 2008 on ObliqSound.

“He comes from the griot tradition. My grandfathers were highly respected spiritual leaders,” says Goetze. “I learn from him and he learns from me. Our music is very much created in the moment, but we understand each other on a much deeper level.”

It was their willingness to absorb new ideas that attracted them to each other. Although Cissoko is well versed in the traditional music of West Africa, passed along from generation to generation, he has always been a seeker, keeping his ears open for new experiences. Despite his ties to West African traditional music, Cissoko is also a huge fan of jazz, and worked with pianist/composer Randy Weston and others prior to the project with Goetze. “My early influences,” he says, “come from Keith Jarrett, French saxophonist François Jeanneau, Asian and Senegalese music and, of course, Mandingue music, the music of my ancestors.”

His immersion in jazz, and Goetze’s fascination with African music, made them natural candidates for collaboration. “I was fortunate to have experienced some of the greatest innovators of jazz live in concert,” says Goetze, “like Miles Davis, Ornette Coleman, Don Cherry, Wayne Shorter, the Gil Evans Big Band and Joe Henderson. They touched and moved me. That is what I am looking for in music, which is one reason I had to go to Africa. I also am a huge fan of Youssou N’Dour.”

Goetze, who has collaborated with some of the most important figures of the contemporary music scene, including Naná Vasconcelos, Craig Handy and Lenny Pickett, sees similarities between Cissoko’s griot tradition and that of jazz: “[Griot music] is not written; it changes with the epoch and the
performance, which is similar to jazz and improvisation.”

“It is our differences that become real strength,” adds Cissoko, who has released two previous solo albums, 2000’s Diam and 2006’s Le Griot Rouge, prior to the duo album Sira. “I adapt myself to the context. I have in myself this ancient tradition of communication. It’s like the branches of a baobob tree, which can touch those of another tree. I’m one of these branches. Volker and I are two musicians of the same generation with different sensibilities, who become one indivisible entity by speaking with our instruments.”

Legendary music photographer Youri Lenquette (Keith Richards, Kurt Cobain, Lou Reed, Prince, Leonard Cohen, Bob Marley) captured Cissoko and Goetze in Senegal in an extraordinary photo-shoot during the recording of the album. The most striking images will be included in Sira’s album packaging and the iTunes digital booklet. Music videos, selected photos and audio snippets will be available for exploration on www.volkergoetze.com.

It would seem that a Senegalese griot singer who plays the traditional West African 21-stringed kora would have little to discuss musically with a German-born, New York-based jazz trumpeter. But today's cross-cultural fusions often transcend both geography and genre, and whether it was fate or design that brought together Ablaye Cissoko and Volker Goetze, it is we who are the beneficiaries. Sira, which translates to mermaid and is the name of Cissoko's youngest daughter, is a demonstration of single-mindedness among two artists and a statement of respect between world-class musicians. Ablaye, who comes from a centuries-long line of griots, or storytellers, is a master of intricate, lyrical string work and a vocalist whose deep emotionalism is conveyed in each line he sings. Volker is an accomplished trumpeter who has collaborated with some of the most important figures of the con- temporary scene. Both are composers with an ear toward the future as well as the past.

“A breath of fresh air, Ablaye Cissoko and Volker Goetze's Sira provides an oasis of calm in which to pause and rest, to reflect and be moved...to tears.“ All About Jazz (USA)

4 stars! “A real late-night beauty...More than a sum of its parts, a conjoining of talents that brings real magic.” All Music Guide

“The music on this album is a revelation.” Songlines (UK)

5 stars! “Their effortless conversation, between echoes of tradition and invented vocabulary, both soothes and thrills.” Mondomix (France)

4 Stars! “Recorded in Senegal as a duet, Sira marks a true meeting of the minds. 10 delicate titles, a hymn to simplicity and to the universality of music. Beautiful.” Jazzman (France)

“What’s unusual is not so much the combination of instruments, but the way in which these two musicians of clearly different backgrounds have created quite a distinct sound. The album is a wonderful collaboration of cultures and language.” BBC World on 3 (UK)

Bandcamp Daily  your guide to the world of Bandcamp