GRIOT (Home Use Only) 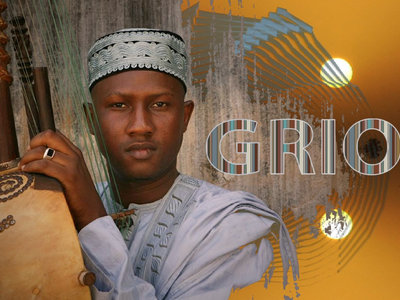 “Senegalese kora and western trumpet make fabulous music together! Volker Goetze’s enthralling documentary melds dazzling visuals and haunting songs to serve up a feast for the senses. Griot introduces us to Goetze’s own soulful trumpet stylings and the extraordinary voice and calabash harp artistry of Ablaye Cissoko. "Africa is the spiritual centre of the Planet Earth," claims one of the many contributors to this enchanting film, and, given the evidence, it is a claim that becomes difficult to disprove.

Ostensibly, Goetze’s documentary sets out to explore the history and role of the "griots" whose spiritual and musical talents are passed "through the blood" from generation to generation. Their role is many-faceted: historian, storyteller, praise-singer, poet and musician. Ablaye Cissoko, thinker, leader and gifted musician, is an examplar.

The film has at least three elements that compel our attention and capture our minds and hearts: the outstanding music; the cinematography, which brings to life the vibrant colours of West Africa and the splendours of its natural life; and the almost hallucinatory animation which adds another texture to the music. In common with other exceptional documentaries, Griot amounts to more than the sum of its parts. It is a paean to the senses: at moments our eyes are dazzled by what we see, at others we can close them and just let the haunting music flow through us.”

SAM POLLARD. Co-Producer/Post-production Supervisor. Multiple Emmy Award winning, Peabody Award winning and Academy Award Nominated producer and editor,best know for his work with Spike Lee on When the Levees Broke, Mike Tyson, 4 Little Girls, Mo’Better Blues and Jungle Fever. From time to time, Pollard serves on advisory committees for the National Endowment for the Humanities; National Endowment for the Arts; or the Independent Television Service (ITVS). The idea to have Sam Pollard on board existed already in the early stages of development of The Griot in late 2007. Not only is he one of the most respected documentary editor, Sam Pollard is able to present complex issues in a compelling way in films.

VICTOR KANEFSKY. Co-Director/Editor. 58 years in film industry, Victor Kanefsky ran a film and video editing service that trained, among others, Sam Pollard. Cajun Jockey, Emmy Award; Our Latin Thing and Style Wars, both documentary classics; as well as Distant Harmony, Pavarotti in China; Adam Clayton Powell, Academy nominated; Our Latin Thing, Filmix Film Festival award winner; Ganja and Hess by Peter Gun, official selected at Cannes. Mr. Kanefsky is highly respected as having taught many of the best editors of today, still working and advising, he is the person Sam Pollard learned the trade of Editing from.
LESLIE MULKEY (A.K.A. HOLCOMB REED). Writer. Film, video, NLE editor (Avid/Final Cut) with over 20 years in the business - worked for CBS News Sunday Morning, 60 Minutes and 48 Hours, ABC News 20/20. His experience at CBS enabled him to make editorial decisions, most of them making it to the final broadcast version.

VOLKER GOETZE. Producer/Director. Award-winning musician, composer and producer and close friend of Ablaye Cissoko - they met in 2001 for the first time. Volker Goetze visited and performed many times in Senegal since 1996.

RANDY WESTON. ASCAP’s 2009 Living Jazz Legend. Pianist, composer, bandleader. Mr. Weston’s connection to Africa started as early as the sixties, being one of the first to move to Africa in the search of roots. Being a Jazz-legend and already having met Ablaye Cissoko at the Saint-Louis Jazz Festival in 2007 provides a very natural connection. From Wikipedia:
After five decades devoted to music, Randy Weston remains one of the world's visionary pianists and composers, who continues to be an innovator and educator, touring throughout the Americas, Africa, Asia, the Caribbean, and Europe. In 2002 he performed with bassist James Lewis for the inauguration of the Bibliotheca Alexandrina in Alexandria, Egypt. That same year he performed with Gnawa musicians at Canterbury Cathedral at the invitation of the Archbishop of Canterbury. He had the honor of playing at the Kamigamojinja Shrine in Japan in 2005. He has been the recipient of many international awards, including: in 1997 the French Order of Arts and Letters; in 1999 the Japan's Swing Journal Award; and in 2000 the Black Star Award from the Arts Critics and Reviewers Association of Ghana.

Volker Goetze is a German-born, New York-based trumpeter, composer, and filmmaker. He has performed and presented his work at Carnegie Hall, the Kennedy Center, Merkin Hall, WDR Cologne, Gasteig Munich, Jazz-A-Vienne, Jazzhouse Copenhagen, World Festival of Sacred Music (Los Angeles) and the Opera Festival in Munich. His work fuels cross-cultural dialog, incorporates multiple disciplines and utilizes cutting edge technology. His recent compositions derive from folklore music, rock, jazz, contemporary music, classical as well as baroque music. In the recent years he has been investigating the oral culture and storytelling of West Africa and its influences on Jazz and Black Culture in America. GRIOT, a feature documentary about the oral music tradition in West Africa, is Volker Goetze's debut as a film director and has since developed into a multimedia performance symphony documentary. GRIOT screened at the Flaherty Film Seminar and opened in film festivals around the globe. Last year, GRIOT opened theatrically throughout Canada and further releases are scheduled in the US and Europe for Fall 2014.

Besides maintaining a busy international concert schedule, Mr.Goetze has conducted master classes and has been featured as a panelist at the Apollo Theatre and New York Foundation for the Arts.

The film is neither a traditional western documentary, as it does not settle for a conceptual understanding of our subject; nor is it simply a performance piece, as it does not settle for collecting powerful songs. This piece celebrates the art of the Griot - the art of the praise-singer and musical healer - by expanding the narrative through an interaction of poetry, music, song, stunning visuals and earthy sounds. Our stylistic approach taps into the very essence of the healing work of Ablaye Cissoko as a musician and activist in his home country Senegal. The approach is consonant with the life and history of Ablaye Cissoko himself. He descends from Kimitang Cissoko, the inventor of the kora, the African lute-harp. A genie directed him to build the first kora and the beautiful music he created with it lifted his people from their despair. Ablaye Cissokos music similarly has the power to heal broken people. His songs touch hearts and already reach far beyond the borders of West Africa.

ships out within 3 days